Sep 28 Posted by Administrator in General 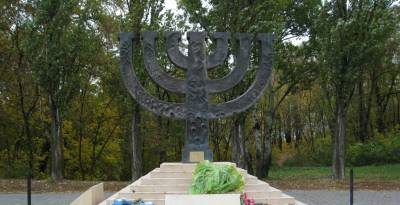 On 29th-30th September 1941, members of Einsatzgruppe C murdered the Jewish population of Kiev at Babi Yar, a ravine northwest of the city. Here, Lady Esther Gilbert has selected excerpts from Sir Martin Gilbert's 1991 travel diary and The Holocaust, The Jewish Tragedy to tell the story.

24 August 1991, Ukraine achieves independence from the Soviet Union.  The following is an excerpt from Sir Martin's visit to Kiev one month after independence:

Monday.  30 September 1991.  8.40 am.  I am sitting in an aeroplane at Heathrow about to take off for Vienna.  Until twelve hours ago I did not think that I would be making this journey.  I have been asked to deliver a paper at a conference in Kiev to mark the fiftieth anniversary of the massacre of 33,000 Jews at Babi Yar at the end of September 1941.

Tuesday.  1 October 1991.  Hire an Intourist car, an old but large and well-polished Buick (!), and driver. … Drive through the former Jewish streets of Podol, through the main market square, past the former Jewish market, and then through the winding hill suburbs toward Babi Yar.  The ravine is in a suburb between a Soviet military cemetery and two roads with blocks of flats on their far sides.  Even before the ravine comes into sight one sees the monument; it is large, heavy, metallic, almost grotesque.  On it are many wreaths.  In the shallow ravine are flowers.  I walk around the ravine, which has had a low hedge planted all along it.  I feel quite ill.

A teacher is explaining to her schoolchildren:  'Only Jews were murdered here.'  She then tells them that many thousands of those who were murdered were young children like themselves.

At the entrance to the ravine, just before the monument, a Jewish woman is selling small memorial pins, and a Jewish Russian-language newspaper.  It is the first number:  Hadashot-Novosti (News), 'the Newspaper of the Association of Jewish Organisations in the Ukraine.'  15,000 copies have been printed.  In it is a detailed explanation of how to apply for a visa to Israel.  On a notice board on the pavement are listed all the events in connection with the Babi Yar anniversary, including a concert at the Yar, and our conference.

I recall an episode that I described in The Jews of Hope seven years ago.  On 29 September 1968 the Soviet authorities had held an official memorial meeting here at the Yar.  Hundreds of Jews attended from Kiev and elsewhere.  To their horror they heard a senior Communist Party official denounce not only the Nazis, but the Zionists and Israel, 'the accomplices of genocide'.

Kochubievsky had exploded with rage.  Six weeks later he was arrested and sentence to three years 'severe regime' labour camp.  He told me the story when we met many years later in Jerusalem.

… There is to be a Jewish monument at Babi Yar, after a forty-year refusal by the Communist authorities to allow one.  The design was put to competition, and won, the day before yesterday, by a Russian Jewish architect, Biletsky, who emigrated to Israel six months ago.

… Thursday.  3 October 1991  … Return to Babi Yar,  Visit Podol again.  Darkness is falling.  It is like a film set of Jewish life a hundred years ago.  (I typed out, 'a hundred tears ago').  The synagogue is brightly lit up, its yard full of groups in animated discussion.  The nineteenth century shop-fronts along Konstantinovskaya and Sagajdachnovo Streets, and along the Upper and Lower Vals, are likewise lit up.  It is a warm night.  The streets are full of people.”

What happened at Babi Yar?  The following are excerpts from Sir Martin's book The Holocaust, the Jewish Tragedy, Chapter 13, “A Crime Without a Name” 1941:

Since the German occupation of Kiev on September 19, the Jews had waited, uncertain of their fate, noting, as the sixteen-year-old Konstantin Miroshnik later recalled, the 'joyful faces' of some of the Ukrainians who stood watching the German troops arrive.  On the second day of the occupation, Ukrainian policemen appeared on the streets, wearing armbands announcing that they belonged to the 'Organisation of Ukrainian Nationalists'.  For nine days the Jews were unmolested.  But both they and the Ukrainians had a sense that all was not well.  Miroshnik later recalled how one of their Ukrainian neighbours said to his grandfather, 'Well, Leib, your Jewish power has come to an end, the new order will begin now, so keep in mind, you'll be reckoned with ….'

… At Kiev, on September 27 an 28, posters throughout the city demanded the assembly of Jews for 'resettlement'.  More than thirty thousand reported.  Because of 'our special talent of organisation', the commander of the Einsatzgruppen reported two days later, 'the Jews still believed to the very last moment before being executed that indeed all that was happening was that they were being resettled.'

The Jews of Kiev were brought to Babi Yar, a ravine just outside the city.  There, they were shot down by machine-gun fire.  Immediately after the war, a non-Jew, the watchman at the old Jewish cemetery, near Babi Yar, recalled how Ukrainian policemen:

'… formed a corridor and drove the panic-stricken people towards the huge glade, where sticks, swearings, and dogs, who were tearing the people's bodies, forced the people to undress, to form columns in hundreds, and then to go in the columns in twos towards the mouth of the ravine.'

At the mouth of the ravine, the watchman recalled:

'… they found themselves on the narrow ground above the precipice, twenty to twenty-five metres in height, and on the opposite side there were the Germans' machine guns.  The killed, wounded, and half-alive people fell down and were smashed there.  Then the next hundred were brought, and everything repeated again.  The policemen took the children by the legs and threw them alive down into the Yar.'

... After two days of shooting, the Einsatzkommando unit recorded the murder of 33,771 Jews at Babi Yar.  The unit's machine-gunners had been helped by Ukrainian militiamen.

In liberated Kiev, on September 29, Jews gathered to mark the third anniversary at Babi Yar.  Among those who wished to commemorate their murdered relatives was Sara Tartakovskaya, whose father, mother and sisters had been among the murdered,  'We came to the place of execution, to Babi Yar,' she later recalled, 'and descended there to the bottom.  We were gathering the burnt bones …. The head had two plaits, pins, and a hole in the temple.  I was standing, weeping:  she could be my sister.' ”

Throughout October 2016, readers of this blog are entitled to a 20% discount for Sir Martin's Routledge Atlas of the Holocaust.  Click here and use discount code DC360.