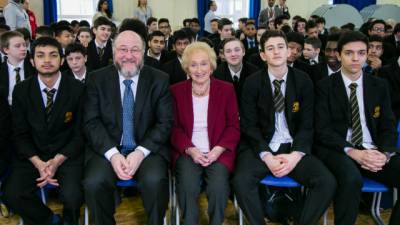 On Holocaust Memorial Day, Chief Rabbi Ephraim Mirvis pays tribute to Holocaust survivors who tirelessly travel across the country sharing their testimony in schools and communities.

Urban legend has it that the great Jewish violinist, Itzhak Perlman, was once performing to a packed theatre on Broadway when one of his strings unexpectedly snapped with an audible twang. The audience held its breath, expecting that the performance may have to end or, at least, that there would be a break whilst a new instrument was found. But, with a deep breath and a renewed focus, Perlman proceeded to do the impossible – to play the rest of the concerto almost flawlessly on three strings. In explaining the extraordinary feat after the performance, he is said to have remarked, “sometimes in life, you have to make music with what is left.”

I think of these words often when I meet Holocaust survivors who invariably epitomise dignity and unshakable resolve.

In the modern age, there is a near universal tendency to recognise and reward people who run the fastest or jump the highest; people who are most frequently found on our television screens or in our newspapers for their talents in the arts or science – as well we should. But this year, I was filled with pride when I saw the names of so many Holocaust survivors counted among those honoured by Her Majesty The Queen in the New Year Honours.

Our Sages famously ask the question, “Who is strong?” The answer, we are taught, is “one who overcomes their inclinations”. None among us can begin to imagine how survivors must have felt as the Nazi regime eventually crumbled and they finally found their freedom. The sense of hopelessness and of having been betrayed by humanity must have been overwhelming. There was not (and could never be) any rule book or prescribed structure for how a person should rebuild their life, having had every element of their humanity savaged. If one Holocaust survivor had somehow summoned the strength to overcome their ordeal and live a happy life, it would have been extraordinary. That so many survivors have made it their mission to use their experiences to make a positive impact on the world around them, is nothing short of a miracle.

There is a great deal to be learned from the way that the first man and woman, Adam and Eve, responded to the first human tragedy. When Cain murdered Abel, his parents might have been forgiven for thinking that the experiment of human civilisation had failed and that all hope was lost. What did they say when they learnt of this catastrophe? The answer is nothing. There is no record in the Bible of them having responded in any way at all, other than continuing with their lives, having another child and rebuilding their family. You have to make music with what is left.

So many survivors spend countless hours travelling around the country and abroad sharing their testimony with schools, communities and religious groups. They do so in their spare time and for free. Wherever they speak, they take with them the universal messages that humanity is precious, whatever it looks like, that difference should be celebrated never feared and that hatred, left unchecked, can ultimately lead to the worst kinds of evil if we do not challenge it. They are making music and with every talk they give, with every young person they affect, they are changing the world for the better.

The Holocaust is now a lifetime away and the time when there will be no more survivors left to share their experiences is ever closer. Let us resolve together that we will take a crucial step beyond honouring Holocaust Survivors with awards and titles and commit to honour them by protecting their legacy for posterity. We will never forget.