Holocaust Memorial Day 2016: Every student needs to learn the lessons from history 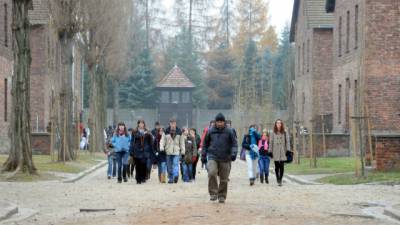 Today marks Holocaust Memorial Day and the 71st anniversary of the liberation of Auschwitz-Birkenau. Rob Young, NUS LGBT+ (Open Place) Officer, has blogged on why all students must learn about the Holocaust.

As an officer at the National Union of Students I directly represent people of LGBT+ backgrounds. I’m also a qualified lecturer in health and social care. Both of these roles mean I have been confronted with the daily reality of people being treated differently, because of who they are or where they come from.

As someone who is lucky enough to be well-educated, with qualifications, a degree and Post Graduate education, I thought I understood history well. But when I attended the Holocaust Educational Trust’s Lessons from Auschwitz Project, it was clear to me that my own understanding wasn’t what I thought it was. The lessons I learnt on the course were far more horrifying than any textbook in school could ever teach us. Being confronted with this history face-to-face was a harrowing experience I will never forget.

I was aware of the recorded number of people murdered during the Holocaust. It’s a figure relatively well known by a lot of people. But that number is far too many for any of us to be able to comprehend in reality - let alone when you take into account the fact that most accounts don’t count the persecution and extermination of certain groups, such as LGBT people, as Holocaust victims.

During the visit to Auschwitz-Birkenau we heard stories of so many who suffered based on their identity. The stories of those, even when the camps were liberated, who were imprisoned, victimised and persecuted because of who they were. Stood at the camp, I remember being utterly horrified that human begins could treat each other in this way. I was particularly struck by the fact that many of the survivors of such barbarity weren’t free even once they had been ‘liberated’. As someone who campaigns every day for people to be free, no matter who they love, and regularly uses the term of ‘liberation’, this was something I found difficult to comprehend.

Remembering all the people who were murdered and victimised under Nazi rule is incredibly important. As living memory fades, we must ensure that future generations remember these terrible scars on human history. They cannot be forgotten. There is no rationale or excuse for fascism and my journey to Auschwitz with the Holocaust Educational Trust showed me the human tragedy it leads to.

I certainly think more carefully when I use words like ‘fascism’, ‘Nazi’ and ‘Holocaust’ since the trip. Nothing can replicate the suffering or the scale of the Holocaust for the peoples whose life it took and affected. To be stood at the place where that happened, where millions upon millions of Jewish people were systematically murdered through state oppression, is something that will stay with me forever.

Throughout history, the hatred of groups of people based solely on their identity has led to atrocities all over the world. This year, as antisemitic attacks have risen, we are reminded that such discrimination and hatred still exists in the world. We have to do more in society to stamp it out for good. I believe many more people need to be exposed to the harsh realities and lessons of history that come with visiting Auschwitz. People need to understand more about the consequences when discrimination goes unchallenged and is made socially acceptable.

But far too often it appears that the only people fighting to remember the Holocaust are Jewish people. It is incredibly important that Jews themselves lead us all to remember and learn the lessons of the Holocaust, but supporting their work, educating society and whole generations should be the responsibility of every single one of us. This is particularly important when so many people from so many different identities and groups were persecuted by fascists – in many states – but particularly under the rule and direction of Adolf Hitler and his Nazi regime. If we truly want to educate society about these atrocities and the Holocaust, more needs to be done.

I believe that our curriculum and teaching of history does not do enough to educate young people on the true horrors of what happened – not just at Auschwitz-Birkenau but at all camps throughout Europe. As somebody who represents students, I want to ensure more people receive a hands-on-history approach by visiting historical sites. Sitting in a classroom will never give students the same opportunity to learn the lessons of history for themselves.

But this isn’t just about primary and secondary education. As part of the student movement, I want organisations like NUS to work closer with people like the Holocaust Educational Trust, as well as the Union of Jewish Students and others, to ensure more students and student leaders can take the same journey through history as I did in Poland.

Lessons from Auschwitz is one of the most powerful lessons anyone can ever take. As we see a worrying resurgence of scapegoating and far right extremist politics, we must do more to ensure that students of all ages can benefit from that lesson of history, and not just in the class room. Educating future leaders and building a stronger society through active citizens is the only way we can be assured that we will never forget the Holocaust.