Ottó Komoly (Kohn) was my father’s older brother. He played a remarkable role in Hungarian Jewry before and during the Holocaust, but never received the international recognition his activities deserved. I would like to fill the gap with this testimony.

He was born in Budapest in 1892.  His father David Kohn attended the first Zionist conference and founded the movement’s Hungarian branch.

Ottó fought in the Austro-Hungarian army reaching the rank of captain, wounded in action, and awarded military honours. He subsequently graduated at the Technical University of Budapest, while active in the youth Zionist movement. 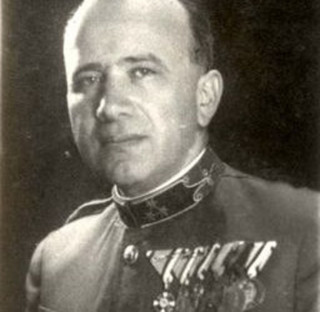 In 1939 Komoly considered moving to Palestine but decided to remain in Hungary to help his fellow Jews. In 1941 he was elected Chairman of the Hungarian Zionist Federation, and in 1943 formed the Aid and Rescue Committee (or Va’ada) in Budapest. Together with Israel Kasztner and several others, they were involved with relief activities and attempts to smuggle huge numbers of Jewish refugees mainly from Poland and Slovakia into  the country to safety, and helped organize food and medical services for the thousands who poured into Budapest,  and later was involved in seeking escape routes for them.  The decorations he had received in the war exempted him from the country’s anti-Jewish measures, giving him freedom to act on several different levels: he lobbied ceaselessly trying to convince the government of Admiral Miklos Horthy not to turn over the Jews for deportation, despite the leadership’s alliance with the Nazis.

When Germany occupied Hungary in March 1944, the committee's leaders divided up responsibilities for saving Hungarian Jews. Komoly worked on procuring support from Hungarian political and church leaders and diplomats, (while Joel Brand and Kasztner began negotiating with Adolf Eichmann). He tried to influence the government using his military status and his connection with the son of Miklós Horthy. Under his leadership, the Va’ada cooperated with non-Jewish protests against Nazi policies in Hungary, especially among the clergy and politicians. He had contacts with the Hungarian liberal circles, the Spanish and Swiss consulates, the Pope’s representative, the Protestant clergy, and some ministers. Komoly also accepted a position on the Jewish Council, trying to smooth the conflict between the various factions. He also supported the underground activities of the Zionist youth movements and worked with all his heart and strength in the rescue of Jews. 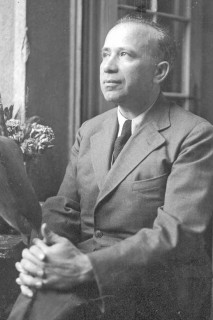 Fairly soon after, at the initiative of Friedrich Born, ‘Department A’ of the International Red Cross (IRC) was set up, and Ottó Komoly was invited to serve as its head. The Department worked initially towards the rescue of children. He ran an office that operated 35 different children’s homes, in which some 550 adults cared for as many as 6,000 Jewish children separated from their parents. The ‘A’ Office, as it was called, also ran safe houses, where, under the protection of foreign legations, Jews could find temporary refuge. They also organised shelter, food and medical services for Jewish hospitals, and later for the ghetto.Bottom of Form

Together with his deputy Kasztner, Komoly was involved in organizing the rescue train that carried 1,686 Jews to neutral Switzerland in June 1944, again passing up the opportunity to include himself or his wife on the passenger list. He does not have the kind of name recognition of Carl Lutz or Raoul Wallenberg, two other rescuers of Hungarian Jews, but his efforts and his accomplishments were no less impressive than theirs. He remained in Budapest throughout the war – probably matching or exceeding everything other Jews or the righteous achieved in saving Jewish lives.

On December 28, 1944, Komoly moved into Budapest’s Ritz Hotel, where the local representative of the IRC was based for safety. Four days later, on January 1, he was taken away for questioning by members of the Arrow Cross fascists, who told his colleagues he would be back the same day. He was never heard from again, and it is likely that he was, like thousands of other Jews, shot, with his body dumped in the nearby Danube. Less than three weeks later, on January 18, Budapest was liberated by the Red Army. 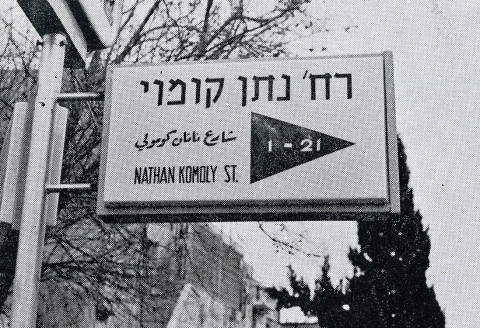 Komoly’s wife and daughter survived the war and settled in pre-state Israel. In 1953, Moshav Yad Natan, in the northern Negev, was named in his memory. He also received one of the highest medals from the Hungarian President posthumously, and streets have been named after him in Israel.  B’nei Brith and KKL-JNF acknowledged his heroism at a celebration in Jerusalem in 2013 in the Forest of the Martyrs. 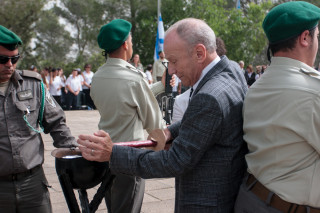 Ottó Komoly was considered a most valued member not only of the Zionist camp, but of the whole community. In the sad history of those days, when internal strife was also prevalent, it is also needs mentioning that he was the one person that every one of his contemporaries, and later the historians in Hungary and elsewhere (including Braham, Cesarani), only spoke of in terms of the highest praise. 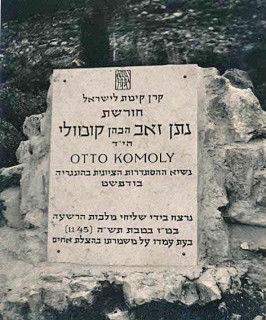