Nov 08 Posted by Administrator in General 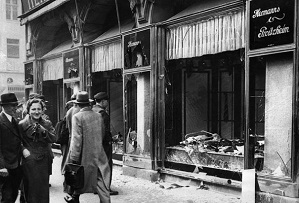 Martin Winstone, the Trust's Education Officer, writes on the origins and impact of Kristallnacht

No date in modern German history is more laden with memory than 9th November. It was on this day that the Kaiser was overthrown in 1918, Hitler launched his abortive Beer Hall Putsch in 1923, and the Berlin Wall came down in 1989. Yet these momentous events are generally overshadowed in popular consciousness by those of 9th November 1938.

The term ‘Kristallnacht’ (literally ‘Crystal Night’, more often translated as ‘Night of Broken Glass’) was a contemporary euphemism coined to describe what happened that day and on the next morning. A better sense of the true nature of these events is conveyed by the usage preferred in modern Germany: ‘November pogrom’, a nationwide wave of violence which marked a decisive moment in the progressive radicalisation of pre-war Nazi anti-Jewish policy.

Violence had always been a core element – alongside the better known legal and administrative measures – of Nazi antisemitism prior to 1938, as evinced by the attacks on Jews which had accompanied the accession to power in 1933 and had preceded the introduction of the Nuremberg Laws in 1935. However, such violence had essentially been initiated locally by party radicals unhappy with what they saw as the overcautious policy of the leadership (although that same leadership rarely discouraged them).

Whereas many German Jews had believed that their legal exclusion from society through the Nuremberg Laws might usher in a period of stability on the grounds that the Nazis would believe the Jewish ‘problem’ solved, a growing number of party members – both leaders and activists – were frustrated by 1938 with what they saw as the failure to achieve their ultimate aim of forcing Jews to leave Germany. Whilst many tens of thousands had indeed emigrated since 1933, this was not enough for the Nazis, especially after the Anschluss in March 1938 brought a further 200,000 or so Jews under German rule. From late 1937 onwards anti-Jewish laws and propaganda had thus been entering one of their periodic phases of escalation whilst the Anschluss itself triggered what can only be described as pogroms in Vienna and elsewhere along with often violent seizures of Jewish property.

The Anschluss in turn had a radicalising effect on the whole Reich, encouraging renewed legal measures against Jewish businesses and a series of anti-Jewish riots in Berlin and other cities from May onwards. In Vienna, meanwhile, Adolf Eichmann developed procedures to expedite the emigration of Austrian Jews (whilst confiscating their assets). However, Hitler’s increasingly aggressive foreign policy, bringing with it the possibility of war, heightened the urgency in Nazi eyes of making the Reich free of Jews as quickly as possible. This contributed to the decision to forcibly expel around 18,000 Jews with Polish citizenship in October 1938 but more broadly engendered an atmosphere in which the Nazi leadership was seeking a moment of reckoning.

Therefore, although the November pogrom was ostensibly triggered by the assassination in Paris of the diplomat Ernst vom Rath by Herschel Grynszpan (whose parents had been amongst the Jews expelled to the no-man’s land on the German-Polish border), it was in reality the culmination of months of growing pressure. Grynszpan’s actions merely provided an excuse whose convenience for the Nazis was enhanced by the fact that vom Rath (who was shot on 7th November) happened to die on 9th November; that is, on the holiest day in the party calendar when Old Fighters gathered in Munich to commemorate the ‘martyrs’ who fell in the Beer Hall Putsch.

As is well known, the wave of violence which followed was not the ‘spontaneous’ outburst of popular anger presented by the regime (although, regrettably, there were undoubtedly ordinary citizens who participated). Rather, it was a state-sponsored pogrom, directed especially by Joseph Goebbels, which brought the destruction of more than 200 synagogues and attacks on thousands of homes and businesses. Officially, 91 people were killed but some historians have argued that the number of victims should be considered much higher since there were many suicides and several hundred of the 30,000 Jews temporarily sent to concentration camps died.

These figures hint at one – from certain perspectives the principal – reason for remembering Kristallnacht. That is, we should remember the lives lost and countless others ruined. The pogrom should be seen as a tragedy in itself, an event whose innate horror can sometimes be obscured by our knowledge of what was to follow. Yet it was, of course, also of signal importance within the wider history of Nazi antisemitism. No historian would today claim that an irrevocable course had been set which would inevitably lead to the Holocaust – there were too many as yet unforeseeable milestones further along the road. Nonetheless, Kristallnacht did mark a crucial moment, our acknowledgment of its long-term origins notwithstanding. For the first time, violence was state-sponsored on a nationwide scale.

Furthermore, whilst many historians have rightly pointed to the murmurs of discontent from elements of the population regarding the disorder and the destruction of property, it is equally true that – with a few heroic exceptions – there was little protest or attempt to intervene, even if only with a kind word or offer of shelter. The apparent equanimity of most citizens towards the fate of their neighbours has often been taken to suggest that the legal ostracism of the Jews was increasingly accompanied by what has been termed ‘social death’.

In terms of Nazi policy, the impact was considerable. Some leaders – notably Göring – shared some of the popular misgivings about the destruction, not least because of its potential economic costs. However, they responded – in a manner so characteristic of the Nazi system of government – with radicalism of their own, as they themselves sought to coordinate and control anti-Jewish policy. The impact could be seen in the measures of the following days: the imposition of a one billion mark fine on the Jewish community to cover the costs to insurance companies, the complete exclusion of Jews from the economy, the final expulsion of Jews from state schools, and so on.

One final point should not be forgotten. Kristallnacht and its aftermath brought the destruction – in many cases final – of Jewish life in most of Germany and Austria. Dispelling any remaining illusions that the situation might still be salvaged, it prompted more than 100,000 Jews to emigrate. Yet the rift was psychological as well as physical. In most cases, Kristallnacht brutally and irreparably terminated the love affair between the Jews of Germany and their country – their Heimat. A relationship which had so greatly enriched both parties and which had, in many Jewish eyes, apparently been forever sacralised by Jewish sacrifices as Germans in the trenches of the First World War was shown to have been – or perhaps better to have become – an unrequited one, whose memory today often lingers chiefly in the countless memorial plaques where synagogues once stood before they were consumed by the flames of the night of 9th-10th November 1938.