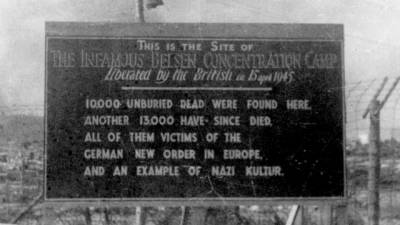 In the latest of our blogs to mark the anniversary of the liberation of Bergen-Belsen, historian Professor David Cesarani OBE gives us a brief history of the camp.

Bergen-Belsen camp was originally established to hold prisoners of war in 1940. ‘Stalag 311’ acquired a grim reputation the following year when up to 14,000 Soviet POWs died there. In April 1943 a new camp was constructed to hold Jews who were potential candidates for exchange for German nationals held by the allies. This project was rooted in the notion that Jews had value as hostages in the eyes of the British and Americans. Two small-scale exchanges did actually take place, in November 1942 and July 1943. But Belsen was symptomatic of a grander vision to use Jews to gain advantage for the Reich. In December 1942, Himmler won Hitler’s agreement to ransom small numbers of Jews for foreign currency. During the spring of 1943, the German foreign office came up with a similar idea but their specialists envisaged of a pool of 30,000 Jews. The redundant installation at Belsen was selected as a suitable location to hold them and placed under the management of the WVHA.

In April 1943, the ‘exchange camp’ received 2,400 Polish Jews with South American papers. They were followed by 350 Sephardi Jews with Turkish, Spanish and Portuguese nationality who were placed in a separate section for citizens of neutral states. Early in 1944, 3,670 Jews with connections to Palestine were transferred from the Netherlands to the ‘star camp’, so called because they wore the yellow star when they entered it. Conditions were relatively benign. Under the first commandant, Adolf Haas, families stayed together, the inmates wore their own clothes and the work regimen was light.

In March 1944 the Germans started using part of Belsen as a ‘convalescent camp’. Jews from labour camps who could no longer work were sent there, but not to recover. There were no medical facilities, almost no food, and nowhere to house them except in already overcrowded huts or tents. In effect, they were sent there to die. Of 1,000 stricken prisoners transferred from Dora-Mittelbau because they could no longer lift a pick or carry a sack of cement, fewer than sixty survived. After the deportations from Hungary began, 1,684 Jews arrived as part of a deal to save them from Auschwitz. They were kept in a special compound. Hard on their heels came 4,000 Hungarian women who were placed in a ‘women’s camp’ that comprised little more than tents.

The infrastructure would have been unable to cope with these numbers at the best of times, but the erratic deliveries of food, the intermittent water supply, and abysmal sanitation turned it into a charnel house. In the ‘star camp’ 4,000 people made do with one washhouse that had 12 taps - when the water supply was working. The camp for evacuated prisoners, which housed 8,000 souls, did not have any running water or latrines. Over the summer months typhus got a foothold and soon reached epidemic proportions.

Conditions deteriorated rapidly during the winter. Overcrowding was massively aggravated by the influx of 15,000 Jews evacuated from Auschwitz in December 1944. Anne Frank and her sister were amongst those brought to Belsen at this time. There were plans to make it the ‘new’ Auschwitz and Josef Kramer, who had previously been in charge of Birkenau, was appointed commandant. He brought with him kapos from Auschwitz and the full, draconian regimen of the concentration camps. Kramer cut the rations and did nothing to check the spread of typhus. The SS made no effort to pipe water into the prisoners’ camp even though the numbers kept there soared.

By March, the camp population reached 42,000; in April it touched 60,000 even though 7,000 were transferred to Theresienstadt. The mortality rate was astronomical: in March, 18,000 inmates died. During the first two weeks of April the death toll reached 9,000. It was impossible to dispose of the bodies fast enough, so corpses were stacked outside barracks. The living lay side by side with the dead on hut floors awash in excrement. Prisoners roamed the camp in search of food, dropped dead and lay where they fell.

On 15 April the SS handed the camp over to the British Army. This unique arrangement came about because Kurt Becher, Himmler’s special representative ordered Kramer to surrender it intact rather than initiate an evacuation. Wehrmacht officers crossed the British lines under a flag of truce on 12 April and explained to staff officers at the headquarters of British VIII Corps that there was a large concentration camp in the path of the British advance and it would be better to declare it a neutral zone rather than risk soldiers getting tangled up with typhus-ridden inmates or creating a situation in which the prisoners could break out and infect the population. Without having any clue about what they were letting themselves in for, the British agreed to an orderly transfer. It took 48 hours for the fighting to die down sufficiently to allow the advance parties to move in. What they found stunned them and shocked the world.