Rudi Oppenheimer: Why I want you to tune in on Holocaust Memorial Day 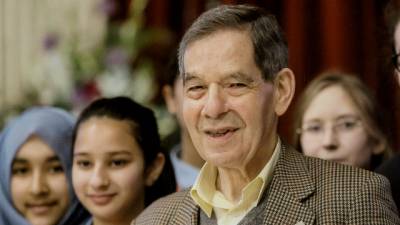 At 10am on Wednesday 27th January, Rudi Oppenheimer will be sharing his testimony through a live webcast. In this blog, he explains why he wants you to tune in.

On Holocaust Memorial Day each year, I travel to a school or event somewhere in the UK to share mine and my family’s story, usually speaking to around 200 people. This year, I will be visiting a school in central London. But this won’t be a usual Outreach session. Thanks to the Holocaust Educational Trust, I will be sharing my story with thousands of people across the country as it will be streamed live online.

I was 4 and a half years old in 1936 when my parents decided that we should leave Germany. We thought Amsterdam was far enough away from Hitler, but we were wrong. In 1940 the German army occupied the Netherlands. Fourteen months later we were deported to the transit camp Westerbork and after seven months, we were deported to Bergen-Belsen, where both of my parents died due to illness. Me, my brother and my sister were left orphaned. We were on the last train out of Belsen on the 9th April 1945. After many days in the train we were liberated by the Russians on 23rd April 1945.

Fifty two years after our liberation, in 1997, I decided to share my story for the first time. Since then I have shared my testimony almost 1,600 times with nearly 165,000 people. On Holocaust Memorial Day, 27th January 2016, I will be sharing my testimony with thousands of students via a live webcast – I have never spoken to that many people at one time and I can’t deny, it’s a bit nerve-wracking! But the idea that students across the country will hear about me, my brother Paul, my sister, Eve, and my parents, Hans and Rita, is incredible.

I tell my story in memory of my parents, and of the 6 million others who were murdered by the Nazis. The theme for this year’s Holocaust Memorial Day is ‘Don’t stand by’. Hatred didn’t end with the Holocaust. My testimony, and the testimony of other survivors can show where prejudice and racism can lead. I am just one survivor, with one story – I hope you will be watching on 27th January.

Sign up to watch Rudi's testimony live at 10am on Wednesday 27th January by clicking here.