Jul 11 Posted by Administrator in General 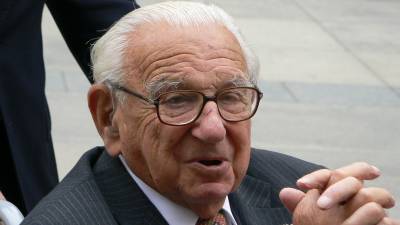 Today, as we launch an initiative in memory of Sir Nicholas Winton, his daughter Barbara tells the incredible story of how he rescued 669 children from the Holocaust.

In 1939, Nicholas Winton, a 29 year old British stockbroker, decided to organise an escape route for endangered children fleeing persecution from the Nazis. Having seen for himself the appalling living conditions of thousands of refugee families who had fled from Hitler’s annexation of the Czech Sudetenland, he was determined to try to bring these children to safety in the UK. With the assistance of other committed individuals, he set up the Czechoslovak Kindertransport, bringing children from Prague to foster homes in the UK.

This operation saved 669 lives, a mere drop in the ocean compared to the millions under threat but for those who were saved, it meant that they had a life that otherwise would have ended. It is estimated that there are 6000 people alive in the world today who are descendants of those children.

Nicholas Winton continued to help others all his life as a volunteer for local and national charities. He felt that this was his real vocation and, seeing the positive results of projects he worked on, gave him great satisfaction. He truly believed that everyone who did likewise would get the same emotional rewards from it that he did and that it is our duty to be active members of our communities and to give assistance to those in need.

Though his work on the Kindertransport was the most significant task he undertook, he continued to focus on the present and the future, looking for solutions to problems he saw around him and working to achieve concrete results.

The story of the Kindertransports is one of compassion and determination to do whatever possible to help those in need. It demonstrates that taking a decision to try and make a difference can have huge and long term benefits to the lives of others. It also shows that, though today’s problems can seem overwhelming and impossible for individuals to influence, this is not the case. One person who decides to act can make a difference and help shape the future.

To find out about our pledge to #ShapeTheFuture, click here.